It seems like yesterday, but I asked the above question following a three-month hiatus from the Gazette. 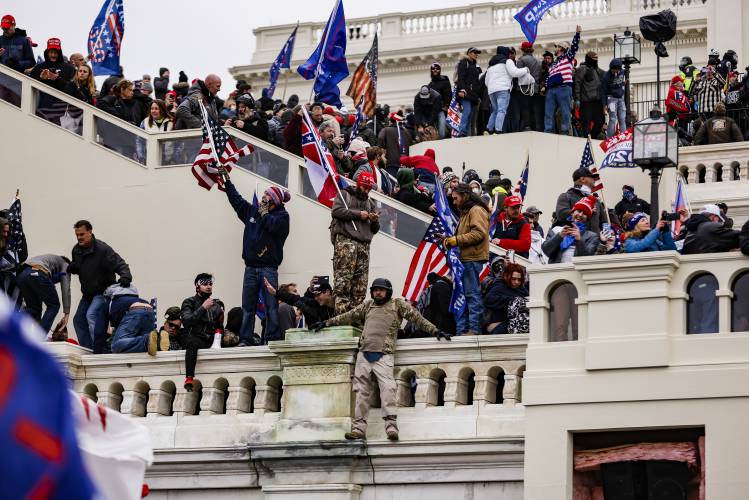 Aprì 2020: The advent of COVID-19 ended my 90-day dry spell. I’d just read a headline article about overstressed young doctors in Boston with sick and dying patients. A new disease with no cure or treatment filled their days. Increasing fear provoked many of them to stop working long enough to write their wills. What, I asked, do they know that I don’t? I quickly concluded, “Obviously, a lot!”

Motto: God helps those that help themselves.

Among the things that I didn’t know was that the Chinese doctor who revealed the pandemic to the world had died from the disease. What no one knew was that 21 months later, 825,000 of our fellow citizens would succumb to COVID.

Today, it’s thriving all around me — my family, and yours. Somehow, speaking as an elder — with three shots of a vaccine and masking up at indoor venues — I still feel my active options are inadequate to what’s out there searching for old bones.

January 2022: One year ago yesterday, myself and every Gazette reader today, survived the Trump self-coup at the U.S. Capitol. There were so many lies leading up to Jan. 6, 2021, and afterward. Truth, that stranger to the GOP, is now negotiable?

At that point, things were starting to look up and look better for our riven nation. The losing candidate never did concede defeat. Before, during, and right up to today, the “former guy” still whines ad nauseam about a “stolen” election.

His claims violate truth. It was always a big lie, and still is!

March 2021: Good news. Scientists developed a COVID-19 vaccine. Every senior was promised a new shot at more life. No small thing after a full year of being true to ourselves and others. We hunkered down, rediscovering the joy of reading books. That now seems like a false dawn. 2022 marks the third year the world is dealing with COVID-19 and its virus variants of delta and omicron. Ready or not, we must recommit to life.

Whenever I’m tempted to voice even one complaint about enforced confinement, news arrives with video of refugee families in tents in near hopeless situations. Try switching from Netflix or Prime entertainments to BBC coverage of overloaded inflatables leaving France for the UK. I found the English Channel a dicey trip in a huge P&O Ferry. Every day, hopeful humans pay smugglers, fully aware of the danger of drowned dreams.

December 1997: My December column looked back to 1967 and my busy days as a young father and local car dealer. I had a weekly radio spot on WHMP, turning to my L. C. Smith Typewriter for new copy.

Frequently, I pitched a factory rebate or low interest rate. That day, a striving writer quoted Virginia O’Hanlon’s letter to The New York Sun, and its editor’s famous reply. I fantasized overhearing our eldest son telling his younger siblings that there was no Santa Claus. “Unlike Virginia’s dad, I would attempt the sensitive task of justification and education. Santa Claus, I began, is just another name for the Spirit of Christmas. He is the joy we feel helping someone less fortunate that ourselves. Santa Claus is the bountiful love we receive as children without questioning its origin. He is both mother and father to the child of today and the parent of tomorrow.”

I doubt if that radio ad was effective; buyers, like voters, grow ever more cynical.

January 2022: Well, we made it. Senior citizens lives have eaten up huge chunks of the 20th century, now 20% of the 21st. Well done! Few of us have been hit by a backing-up dump truck while walking behind it and looking at our phone. “Head’s up” used to be a thing, no more. “Sit up straight and pay attention,” was and probably still is every K-12 teacher’s admonition. I slumped.

A lot worse than bad posture awaits those failing to pay attention to epidemiologists like Michael Osterholm. He predicts that a “viral blizzard” is coming our way. Osterholm: “60% of tests can produce false negatives,” thus unjustified comfort. I listened, and share his advice that K95/KF94 are masks worth wearing — don’t kid yourself by relying on surgical masks.

Dec. 30: The Williamsburg Town Clerk called to say that the Board of Health requires indoor mask wearing — except when partaking food or drink — until the end of January, 2022!

View all posts by dadmin